Pontiac finally on the restoration pathway

Well, I finally found an enthusiastic mechanic/restoration fellow to begin work on my 1953 Pontiac/Barnette. Getting loaded and off it goes to it's temporary home.

The tow company operator was full of questions and wants to see what it looks like once completed. A real professional that payed attention to what he was doing each step of the load and unload. Nice to work with.

I'll post more pictures as the work progresses over the next many months. I have a rough deadline of June 1st 2020. 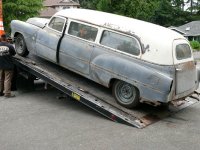 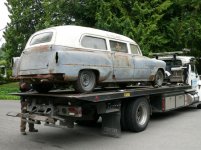 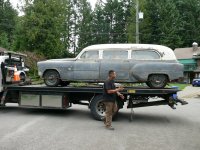 Really looking forward to the progress on your vehicle. Thanks for posting

Super Site Supporter
Bill, I will look forward to watching your ambulance as it goes through its restoration. It is fabulous to see these rare cars restored and then enjoyed and showed with pride.

Super Site Supporter
Nice to see it going off. Glad i got some before pictures.

Bill, well done! Please keep us posted on your progress. Looking forward to what it should be in your eyes.

If you do as great a job in this as you did on the lifeliner, it will be an exquisite refurbishment.

Well COVID certainly slowed things down on the Pontiac. In addition, the lead on the project ended up taking a full time job at the local GMC shop and had a baby. So all of the work has now been moved over to the shop of the body man. He's agreed to complete the restoration. Engine is back from a rebuild and I've been scraping and cleaning the frame in the meantime. First coat of paint on the frame. I'll be doing most of the non-technical (aka grunt) work as much as possible to keep costs in reason. Next step is a second coat on the frame parts I can reach and then start stripping paint. FYI, the green strap on the engine hoist was not used for the lift. The engine is sitting in a cradle and the strap is just for additional support. 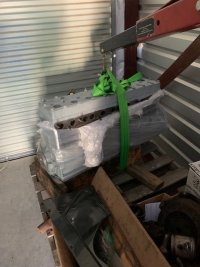 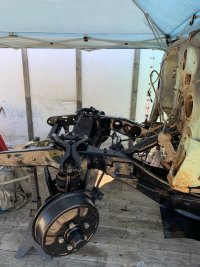 Keep the pictures and notes coming. We can all learn from each other !

Super Site Supporter
I hope the project will go smoothly from the point forward.

Super Site Supporter
Most of these big projects wear out a couple people or more.

Great to see some progress. Thanks for the update.
B

Awesome Bill. Congratulations. Have fun with this.

Super Site Supporter
Bill Hurshes has the correct green for that engine. I do to if we could sneak it in the mail.

Well the project is coming along quite well. My job is the non-technical stuff...scraping, stripping, cleaning, sanding, etc. Floor pans have been replaced and the metalwork is just about complete. I've stripped most of the paint off and am now moving on to sanding off what paints remains. Today I finished up the windshield opening. In really good shape with only a bit of surface rust. 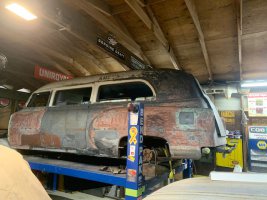 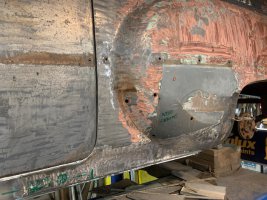 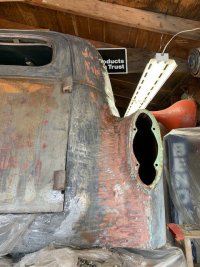 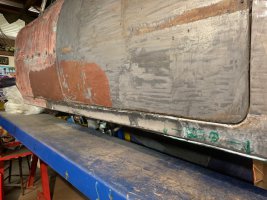 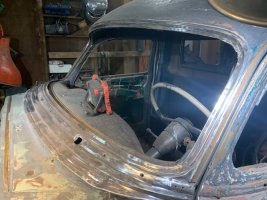 Staff member
Super Site Supporter
It is lookin g grreat. It is a long road ahead of you, but you already have made great strides headed to the finish line. Keep the pictures coming, we love to watch as your progress proceeds.

Great job Bill.
Can you remind us where it served, and your planned paint scheme?

Super Site Supporter
The car is in a lot better shape then mine was. Be nice to get it home.

Tim Prieur said:
Great job Bill.
Can you remind us where it served, and your planned paint scheme?
Click to expand...

Thanks Tim. While I'm still trying to put the pieces of the puzzle together this is the best timeline I've come up with.

While outfitted as a combination, the red lights and siren, window markings and signage were permanent. My thought is that it was purchased as a combination but used exclusively as an ambulance. Penticton Funeral home sold it Mr. Don Becker of Oliver BC (my home town) in 1963.

Don Becker owned and operated 4 Star Taxi Service. They also ran the local ambulance service under a small contract and fee for service for the Town of Oliver (and area). Around 1969 or 1970 Don leased a Ford Van ambulance and the Pontiac was used as a backup or for any long distance transfers.

I obtained the Pontiac from Don's son many years after Don's death.

My plan is to honor the color scheme as I've always known it...white over dark grey. I'll install a nicer siren/light combo and replace the 2 tiny lollipop side lights with Federal FS2 lights (all 6 volt).
B