Is the economy this bad

That’s way to expensive, all my used ones were under 300

Super Site Supporter
I can't imagine giving over $100 for a used casket!
E

Kurt Arends said:
I can't imagine giving over $100 for a used casket!
Click to expand...

I gave 225 for this one, it wasn’t technically “used” it fell out of a truck, was intended for military use I still have the inner sealer at home, now the girlfriend uses this to sell bones out of in the oddities store 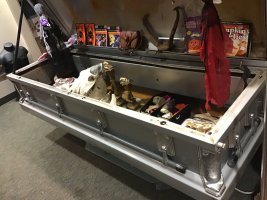 This one was 200 with a few random Halloween things from a guy in flint that was moving. 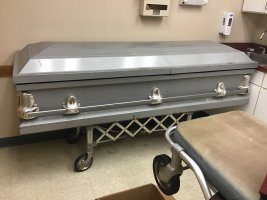 Super Site Supporter
I wish you were closer! I could fix you up! I buy & sell all kinds of vintage funerary stuff. Casket and pumps are $200 each.

Kurt Arends said:
I wish you were closer! I could fix you up! I buy & sell all kinds of vintage funerary stuff. Casket and pumps are $200 each.
Click to expand...

Might have to hit you up for a pump in the near future, I sold my last one earlier this year
W

Not admitting anything (statute of limitation exposure) but those pumps work dang near as well as a Jet Spray beverage dispenser for cooling on a TIG torch. Reaction from people reading the nameplate is near as much fun as watching people read "Embalming Fluid" printed on the bottle someone is drinking from at a black powder shoot.

Super Site Supporter
It is not that the economy is this bad, but the secondary market for caskets is. I mean the primary market isn't as good as it used to be.

I happen to have another hobby, some of you may have seen my musical presentations at various national meets.
The average well equipped funeral home would usually have an organ over in the corner, nothing extravagant.
Well that time has passed, recorded music has taken it's place, sooooo electronic organs of all stripes are literally be given away.
Grandma is gone, the house is getting sold, moving into assisted living quarters etc. Certainly this generation doesn't want them
I have acquired 5 perfectly usable console organs in the last year near nothing. These were $25,000 instruments 25 years ago. now ZERO. 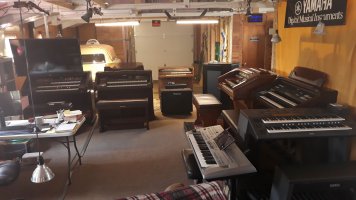 Staff member
Super Site Supporter
I would love to see more pictures of the Cab that you have tucked away. Also, will you be bringing an organ to the 45th International Meet in Sturbridge? We would love to have you and your music attending.

Paul Steinberg said:
I would love to see more pictures of the Cab that you have tucked away. Also, will you be bringing an organ to the 45th International Meet in Sturbridge? We would love to have you and your music attending.
Click to expand...

I will let you know about a musical presentation at Sturbridge. Can't disappoint my adoring fans.
Here are a couple of pics of the Taxi. alas, not a pro car according to the bylaws.....

Lower shot is between shifts. Gotta keep it clean for the clientele 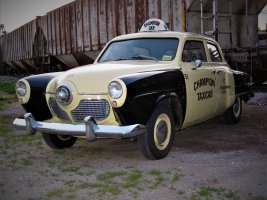 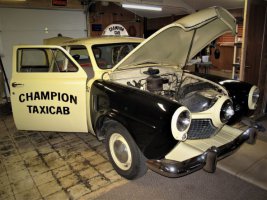 Even sadder than the electronics looking for new homes with complementary Leslies are the wind boxes.

My last boss's wife was a Master Organist with additional German Masters Paper. Her mobil office was a 28 foot commercial trailer with generally 4-5 parlor or small church organs strapped in to play with on jobsites. Her great loves were Theater Organs, one of which resides in Rochester where it suffers in the custody of the Theater Organ Society.

Jeff is right about the price of organs dropping like rocks.
Always have your SCBA at hand when an old organ is brought back alive the first time..

Super Site Supporter
If it's not digital its not wanted today. Doesn't take years of practice to say hay alexia play a song for me. She is every were even in the car with you.

Super Site Supporter
Most thrift stores and Habitat Re-Stores won't even take organs or TVs anymore. Most end up going to the landfill.

Sad but true. I go to many estate sales (due to my other collectibles buy/sell hobby) and no takers even when free. Same goes for most pianos. Add china and glassware to the list unless a rare pattern/maker.
W

John ED Renstrom said:
If it's not digital its not wanted today. Doesn't take years of practice to say hay alexia play a song for me. She is every were even in the car with you.
Click to expand...

There are moments when I consider my loss of hearing a big plus. Never again will I hear a kid who has spent 5 years learning to walk his sticks across the head of his drum that resembles a kettle corn popper for what seemed an eternity as he took authority and complete attention over 100+chatting people in a Church. Onliest thing keeping that room silent was the question did he have one more stroke left to swing. It was barely perceptible that the mighty Wurlitzer was whispering a base note as the drum fell silent, a note you felt more than heard. I had a hunch and glanced at the Leslie a few feet away , it was slowly rotating ready to go to work when 120 pounds of Organist so ordered. The Wurlitzer was ready and willing and it wouldn't be long until 3+ feet of red hair flew. One girl using 1 finger was about to take the room from the kettle corn popper and own it using a lot less energy.

The only voice in the room was named Wurlitzer and now certain the bearings in the Leslies were ready Wurlitzer began to speak. He started with just that single note added a bit of power a couple more fingers and I think a toe attached to the other end of the girl with the mane. I glanced at the podium and saw the Preacher heading for his seat. Whatever he had planned to say would wait. Another note added and I glanced back to the mighty machine. The girl on the bench still looked innocent akin to an Irish Setter pup awaking from his nap. She was walking the monster slowly up its scale. The only thing that could stop what was coming would be a power failure.

A few people in the room, mayhaps newcomers shifted on their feet not from disrespect, more for want of a hint of what was coming. There was no pause, With everybody including Wurlitzer synced the clouds parted and Wurlitzer delivered. The only thing missing as Wurlitzer delivered God Bless America was Kate Smith's voice. Kate wasn't needed that night.

Damn Straight is the same as Amen, ain't it?

Preacher slipped off his stool and stepped to the microphone as the congregation regained its orientation. He was a knowing man, said Folks I have learned the key to a happy marriage is listening to my wife when she speaks. You just heard her, I got nothing to add.
Things like that just gonna happen time to time when a bunch of Nam Vets get together in a room in a plaza under a laundromat where they don't have to remember the Class of 45 don't want them.

I have no recall of ever meeting Alexia, got no feelings toward her at all, but I doubt she could carry the Redhead's music cases. Alexia might be good, might be dam good but I got $100 says she has no idea what to play in an instant when the doors snap open and the only person not on his feet is in a wheelchair as a Gold Star Mother is escorted to her seat on the preacher's arm.

Probably best I don't hear a lot any more!

Super Site Supporter
No she doesn't but the sad part of it is the people that use her don't care.
W

John ED Renstrom said:
No she doesn't but the sad part of it is the people that use her don't care.
Click to expand...

Entropy my friend, been around since the dawn of society and will be after I'm gone. Part of the Creator's grand plan.

Meanwhile as I tread the last of the path to the graveyard, or will it be the Soylent factory I shall hobble along knowing the sound of 11,000+ pipes crescendoing and wondering how long the windboxes can sustain them, as the redwood strips carry the message from key to valve to raise up a joyous noise to the heavens, and someplace in the back file drawers of my mind is the reference aroma of 100 pounds of alloy being poured onto a table to become new pipes or even repair panels for a damaged pipe. I also own the sound of the giant in residence at the Atlantic City Convention Center, and should the necessity ever again arise I can fit a Hoover vacuum cleaner to a parlor organ so an elderly lady can keep playing it and revisit those special nights on her family farm.

Those who don't care told me years ago I am obsolete, all I know is contained in google on their device. So be it. How well does that device function when the battery is dead? Why is the Genesee River dammed South of Court Street and why does the State of NY own and operate that dam? The don't care crowd will starve as they freeze in the darkness when and because Alexia's cousin failed. That is their choice.

Musicians, Mechanics & Warriors are only socially acceptable when they are needed. The rest of the time they should all sit quietly in their storage compartments waiting for Alexia to notify them of the need.

Kurt Arends said:
Most thrift stores and Habitat Re-Stores won't even take organs or TVs anymore. Most end up going to the landfill.
Click to expand... 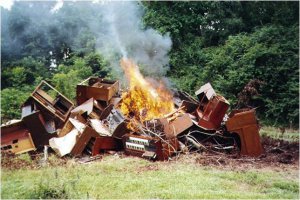