Here's the photos I have.

#1 - 1968 Pontiac supervisor's wagon that carried 2 folding stretchers and was used as a back-up to the back-ups (Kamloops, BC).

#3 - 1967 Pontiac - unknown builder - probably one of the worst uses of a wood-grain sided vehicle - Prince Geroge, BC

You'd hope they didn't have too many patients that were hypochondriacs. One would think that subject may never arise with a sick or injured victim.. Maybe their mind is elsewhere.. But you take someone that is already in an uncomfortable predicament and push the envelope a little, and now you have an uncooperative patient.

Super Site Supporter
BOSTIC,NC, Authorities in North Carolina are looking into whether to extradite a man from Oklahoma for charges connected in an apparent Kodak overdose. Oklahoma resident Steve Loftin is facing charges after apparently giving Bostic Funeral Director Kent Dorsey access to the harmful substance. Dorsey said he was capable of handling the mind numbing substance known as Kodak but his hands were shaking shortly after viewing the Mopar thread. Residents had not seen Dorsey for days, and he was apparently neglecting his business duties when locals caught him pouring over a thread dealing with station wagon ambulances. When forced from his computer, the poor undertaker was heard shouting, "No! no, I need ONE MORE Vista Cruiser! I can take it... and I can stop anytime I want too..." Loftin apparently sent several enthusiasts into overload as he dealt his Kodak supply out over a week period. Much too quick for many to absorb and deal with without proper treatment. Stay tuned for more information on this harmful condition and pending charges.
S

Super Site Supporter
Surely, there must be a few current and former undertakers (and stretcher jockeys) on this site that have some photos to share in these threads, as well...?
S

This '61 Chevy was still in (reserve) service when photographed by my friend Steve Hagy in 1986:

Most of the folks here know about this car, but I'll post some info for those who might have missed it in the last 25 years at PCS meets:

1955 Studebaker Ambulet originally in service in Erwinna PA until I bought it in 1972 at the tender age of 18. Posed as most people remember the car. 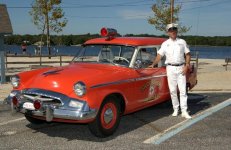 Here's another photo taken by my dad ca. 1968 when he worked for Brenny's Granite City Ambulance Service in St. Cloud, MN while attending St. Cloud State University. This is a 1965 Oldsmobile Vista Cruiser wagon.

Here's a matchbook cover from my collection. I'd love to find a better photo of this 1962 Mercury Amblewagon someday!

Steve: Do you know what the other ambulance in the background is in the A-1 Waco photo? I've seen pix of this nice VistaCruiser before. Baker Ambulance in Odessa had a nice '67 Dodge ambulance that had come from Waco, but I'm not sure if it was from A-1 or someone else.

I have thoroughly enjoyed this thread, and as Steve well knows, I grew up with the stationwagon ambulances: particularly here in the Midland/Odessa area of West Texas. For more than 20 years I managed a small standby ambulance service in Lubbock; and during that time we had our share of stationwagons and short-wheel-based coaches such as Consorts and Oldsmobile Sevilles. Of that assortment, one of my most favorites was a 1965 Olds VistaCruiser wagon that had originally come from Airline Amblance in Corpus Christi. It's my understanding that this car had been specifically built as an ambulance. The rear seat had been removed and replaced with a ramp for the gurney to roll on, with the original jump seat retained. The car also had a large 100-amp alternator. When we bought it, it had been stripped; but you could see where the original Q, lollipops and beacon had been. So we were able to go back with the same setup. This was a fine ambulance in its day.

Anyone reading this thread who has pix of stationwagon and Suburbans ambulances that were manufactured by Gordon K. Allen Co., I would appreciate your emailing copies to me. I am working on an article about this co. and would appreicate anything you might have. Thanks.
S

Skip Goulet said:
Steve: Do you know what the other ambulance in the background is in the A-1 Waco photo? I've seen pix of this nice VistaCruiser before. Baker Ambulance in Odessa had a nice '67 Dodge ambulance that had come from Waco, but I'm not sure if it was from A-1 or someone else.
Click to expand...

Staff member
Super Site Supporter
This is the first 1962 Pontiac station wagon ambulance picture that I have seen where the car is sporting built in tunnel lights. Only wish that there was a full frontal view of this car.


Paul Steinberg said:
This is the first 1962 Pontiac station wagon ambulance picture that I have seen where the car is sporting built in tunnel lights. Only wish that there was a full frontal view of this car.
Click to expand...

While not a station wagon ambulance (the raised roof makes it a SWB limousine-style ambulance, whether built from a wagon or a stripped chassis), here's the best I can do. These tunnels were used by Comet and then C/B from '58 through '62. This particular car was shot in a salvage yard on US 34 near Elmwood, NE in 1992: