A: The short answer is no. It may contain wrinkles, cracks, and possibly even tears due to its age and how it was handled before it got to us. A scanner may interpret colors and contrast differently than human eyes will, so it is possible that the actual photograph may be slightly darker or...
www.ebay.com 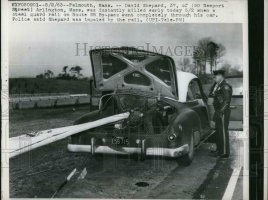 Super Site Supporter
Back around 1991 we bought an 1987 Chrysler 5th Avenue that came with the guardrail. The section came in where the right headlight was. alongside the 318 V/8, through the firewall,the dash (removing the radio), then between the two individual seats,cleared the back seat sit down cushion and was sticking through the left rear door,protruding about eight inches. Yes the Chrysler did start and run. The insurance adjuster told no one was badly hurt. We tried to pull the section out but no go we had to cut in three pieces to get it out Wish I had the pictures we took but they were destroyed in a flood we had.

Impaled by steering wheel shafts was quite common into the 50s until collapsable steering columns came along.
J

Car dealership I worked at in 79 had a new Trans Am towed in that hit a guard rail dead center front and deflected Through the passenger side and out behind the rear wheel. Only the driver was in the car, 4:30 A.M. and drunk. Fortunately nobody was in the car with him as the railing took the passenger seat completely out of the car. One hundred and fifty foot of guard rail through the car, towing service had to unbolt part of the railing to remove the car. State police estimated speed at impact in excess of 100 mph. When the driver came in to see his car a few days later all he did was to complain that nobody would give him a ride to town, he had to walk home after the crash about five miles.
You must log in or register to reply here.
Share:
Facebook Twitter Reddit Pinterest Tumblr WhatsApp Email Share Link
Top