I have one of the best all original examples of this rare, 1 of 50, special edition Sayer and Scovill Victorias. The Centennials, 100th anniversary of S&S, even has a unique "coach" design brocade interior offered this model and year only.

One owner of a similar coach, when placing it for sale a few years ago, stated that there were less than 10, maybe as few as 6, running examples of this coach still available. That particular vehicle had been modified and was no longer original. Mine is original right down to the vintage tire used as a spare. I bought mine in 2003 directly out of service from a small town funeral home in Kansas, it had been used in a funeral 1 week prior. It was originally sold by Dietz & Cox Special Purpose Vehicles out of Wichita, KS. It has a few minor body dings but is still a solid 7 body, with a 9 interior. The engine compartment, 48000, original miles on the 500 cu. in. , needs detailing but I am reluctant to remove the patina, mostly dust, needlessly. It starts and runs superbly, that 500 sounds just like what a Caddillac should sound like. In the near future I will have the exhaust system partially replaced so it sounds more like a hearse, LOL.

Does anyone have info or a contact that I may use to verify or get an estimate of the remaining '76 Centennials still on the road? Thank you. Watch Facebook Marketplace and eBay.

Please do not copy or use the attached photo in any way without permission. A few years ago a person stole a photo of my 1972 Miller and used it to sell screensavers. Not cool!

I believe roughly 50 were made with the horse drawn hearse interior. I know of 12 of the top of my head not counting yours.

Super Site Supporter
Numbers on the S&S in the later years are only a guess. They were farmed out to superior to build them.
S

Site Supporter
Is this one of the Potts F.H. (Independence, KS) cars?
S

Yep, Potts was the original owner per the S&S build tag in the engine bay . "Built by S&S Exclusively For Pott Funeral Homes, Independence Kansas". How did you know that???? However when I bought it I bought from the Zeiner funeral home in Marion Kansas. 150 miles from Independence. The owner, Ty Zeiner, sold his funeral homes, 4 or 5, in small towns and quit the business recently. I bought the S&S several years before he quit. The Zeiner name is still used but no longer Ty's. I bought the '76 as a show of good faith, he had other cars that I wanted also. I always tried to buy ones fresh out of service, I always told the seller to not even vacuum them, hopefully there was a brochure from the last service it was used in, none in the '76. One coach did come with a gurney, one came with a used body bag and one came with dirt (earth) from Israel. The last buy, 2002 Meteor, had a wreath holder, a church key (crank handle) and several roses and an brochure used in the last service. Our first first call car also came with a terrible odor that took weeks to eradicate. Lagniappes all! Again, we have had a number of coaches and 2 first call conversions that had all of the roller floors and fancy interiors just small wheelbase. Kansas has a wealth of older hearses that are in great shape and no big city rust. 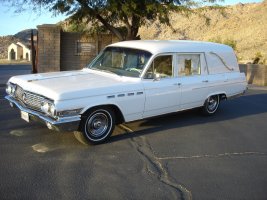