Does anyone have literature or photos showing the original 2-way radio is used in military ambulances in 1951? Mine is a Henney-Packard so if any photos of that or other makes, it would be most helpful. I have sources for a lot of vintage equipment but have no idea what is correct or where the main radio unit itself mounts. 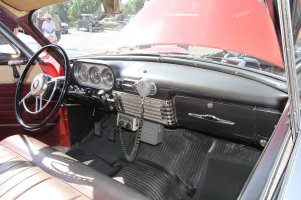 The above photo is from the dash of our 1952 Henny Packard (long wheel base) ambulance. It's not military, but might add support to your queried, Don!
D

Great, thank you! Does your car have the actual radio unit in it too?

Mr. Pierson - do you have holes under and on the dash? If not - it’s quite likely your ambulance never had a radio. In 1952, civilian agencies felt radios were a luxury capability that they advertised to the public. For the military - even today you’ll find many ambulances don’t have permanent installed mobile radios. The Motorola Research Line pictured is period correct for a new install in 1952. http://www.wb6nvh.com/Moto42/Moto42.htm is a great page of info.

Behind the seat is where you’ll often find the radio mounting location. You should look for holes. Holes patterns are the clue to what you had before.
D

My car is over 600 miles away but I’ll check it when I am there next. However, I’ve never seen one of this military ambulances without the radio and it does have the antenna on the roof in the same place as the others. Talking with several radio experts, the speaker mounted to a stud on the firewall rather than to a bracket under the dash and that hole should be obvious too. There were already some holes under the edge of the dash even on passenger cars so they may not be a good indicator without the control head bracket to compare.
D

I forgot to mention that my ambulance doen’t have a “behind the seat” as there was no partition in these long wheel-base 3-door ambulances. There is what appears to be a vertical mounting plate of some sort in the front side of the rear compartment, though, which I suspect is where it mounted. There are full-length fold-up seats along both sides but they stop short of the front seat and facilities for two stretchers attached to the sides and roof. Mine are missing but I know of a 1952 that has them.