Does anyone have a picture of a hearse that has been wrapped in Veterans colors? I am looking in to possibly doing that here.

Super Site Supporter
What would be veterans colors? Other then red white and blue.
R 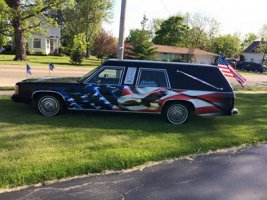 Disclaimer: It's my opinion, you can have your own opinion, we may not agree.

There is entirely too much disrespect for the flag over the last decade, and it rankles me.
Perhaps it's caused by near a full generation who never knew war, I don't know and I'll not invest the time to learn.
I am historically conversant enough to know a salesman named Bellamy created the Pledge of Allegiance to hustle more flag sales, and invented his own salute as well. Almost a century later that is of small import.
Perhaps the entire flag thing has always been a hustle, I don't much opine on that.

There has been a resurgence of flag abuse since 9-11 to the degree the flag has become a car lot pennant. It ain't right!
The tradition of flag draped coffins is well established, a final honor to a man or woman who fought for his country.
Wrapping a hearse in the flag is getting too damn close to carrying a Veteran to his grave in a circus wagon.

Super Site Supporter
I agree, me a window view of the flag wrapped coffin and if one wanted to the branch of service decal on the door. You could have them made up in the magnetic rubber and swap them out. Any more is a poney show to me.
W

Same Disclaimer applies;
I've long held the opinion military funerals should be for members who died in service, not 30 years later. I also have no issue with a Fireman going to his grave on a pumper or a farmer making the trip on his tractor or combine. It has meaning, usually deep to the community. A few years back this area buried a young lady who died in Afghanistan. Her only request was a Piper, and her mom was beside herself filling the request. Her casket was met by Gates Police Pipers who were joined the following day by NYC Pipes. Appropriate & meaningful!
A few years before that we buried a young man who died in Iraq. He was a Vol Fireman who rode to his grave atop his assigned Pumper. The post retreat flag he passed under was held aloft by ladder trucks from 2 companies and every Vol Company in 2 Counties followed to the grave. Again appropriate.
Thankfully such funeraLs are rare. Both examples cited were at the request of the deceased who probably had no idea what their request would become.

We live in a time when some men go to their grave in a pickup truck, others go on a motorcycle hearse, a few go on horse drawn carriages or hearses. Cemetery managers fly across their grounds to make sure cannon staged ready to carry the casket the last yards won't be fired. People attend funerals in shorts and t shirts wearing flipflops, and it's all considered normal. Who knows, maybe it is, a Century back people picnicked at the cemetery. In my ever shrinking world I like to see a bit of dignity at a funeral. As General Lee said at Gettysburg "Regardless what happens here today we shall leave as gentlemen.". I also have no tolerance of disrespect for the Stars & Bars and just might hurt some fool destroying a statue or gravestone.
You must log in or register to reply here.
Share:
Facebook Twitter Reddit Pinterest Tumblr WhatsApp Email Share Link
Top