We're looking to replace the door locks on the Pontiac and wondered if a regular replacement set from Original Parts Group would work? It seems like Superior used off-the-shelf parts, but we never know which shelf! I figure the doors, and probably the glove box locks will be fine, but what about the rear door? Will the trunk lock included in the set accept the existing linkage off the old one? Does anyone have a set with keys for sale? Thanks!

Super Site Supporter
You will find the locks are all the same. The difference it in the way it trips the lever. That and getting 5 keyed a like. To be right you should swap the switch also. There should be only one key. Its not a big problem to change the ends on the locks. To what ever they used. But my experience is the key remotes don't ware out. Just need lubed. So if your short a key, remove one have a locksmith make you a key for it. Then remove the latches and clean them up and relub them. The last set i bought off a seller on e bay cost me 89 bucks for 5 and the switch keyed a like.
L

We already had the ignition switch key made by a locksmith but the owner wants to change out the locks on the two doors and the rear door just in case a previous owner in the area still has a key. I don't think he's worried about locking the glove box, so I'll tell him to get this set. Thanks so much for the info, sir! 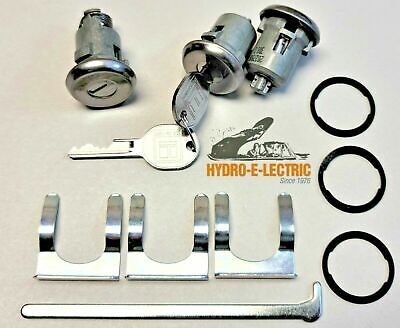 1965 Pontiac Bonneville, Catalina & Perrisienne. Trunk lock. (2) Door locks. All locks in this set are keyed alike. We look forward to speaking with you!
www.ebay.com

Lonny Waddle said:
We already had the ignition switch key made by a locksmith but the owner wants to change out the locks on the two doors and the rear door just in case a previous owner in the area still has a key. I don't think he's worried about locking the glove box, so I'll tell him to get this set. Thanks so much for the info, sir!

1965 Pontiac Bonneville, Catalina & Perrisienne. Trunk lock. (2) Door locks. All locks in this set are keyed alike. We look forward to speaking with you!
www.ebay.com
Click to expand...

Instead of changing the locks, have a locksmith rekey them. It will cost less than replacing the locks and will fit without question.

Super Site Supporter
That trunk lock will not work anyplace in the car. You will need door locks. All they would have to do is change on pin in the locks or swap two. To make the origional key not work.
J

I'd do what Paul said and have a lock shop re-key the tumblers.
I had to get keys made for my 66 Superior Pontiac. Lock shop tried telling me that they had the same key for both ignition and doors. Found that they are two different keys. Maybe it was a Superior only feature. Even my 52 Superior has two different keys.
Personally, I wouldn't worry about changing the locks. What is a person going to steal? They'll break the glass or pop the lock with a coat hanger if they want something bad enough. Like any vehicle, keep anything of value out of sight.

The Pontiac, Oldsmobile, Buick, and Cadillac all used 2 keys for their cars for decades. The door lock operated on the same key as the ignition on all these brands. Chevrolet was the only one that use the same key for both ignition, trunk, and door locks. If I were going to have all the locks rekeyed, I would use one key for all doors. The cylinders are all the same, however, the mechanical trip lever was different between years and brands of door locks. Most times, you can find the key number stamped (4 digits) on the outside of the barrel of the lock. From 1935 to 1966, it consisted of the 4 digits, and starting in 1967, they were a number, a letter, and then 2 numerals. Also starting in 1967 the groove on the side of the key was changed so the ignition key will not go into the cylinder of the trunk lock. Prior to 1967 the ignition key was a hexagon shape, and the trunk was a pear shape, but both will interchange in the locks. You could have an ignition key that would open the trunk on another car and vice versa.
Pictures below are of the 1935 - 1966 Ignition and trunk keys, and a later 67 and up door lock cylinder. You will not on the back end of the door lock cylinder that there is a rectangular clip that holds the door lock mechanism onto the lock. To reverse the lock for the right or left-hand side of the car, you remove the retainer and rotate it 180 degrees on most cars. On some cars, the mechanism will change for the right and left sides. Once you have the locks out of the doors, a locksmith can make you a new key by looking up the key number, and using a punch tool to make a new key by number. Super Site Supporter
Origional the ambulance/ Hearse used the same key. But switches get changed . If your using a square key for the doors it is a ignition blank. My blue 72 has two square keys the silver 72 has only one. Cars get sold people get nervous. Switches get changed. It's been my understanding with each car you go out and see what does what. The worse mess is two different door locks. The old body shop trick when you were hours away from the lock shop and had one damaged. Was a used one went in missing the tumblers. Who but you knew any key would work.
You must log in or register to reply here.
Share:
Facebook Twitter Reddit Pinterest Tumblr WhatsApp Email Share Link
Top