It's time to put the emergency lights back on the 48" Classic. It's been almost 16 months since I took them off. I have lots of pictures, but not of how they were wired. Each light fixture has one wire going to power. Three out of 4 of the places where these will go have two wires coming out of the roof, and one just has one wire coming out. First I thought these were just a series. BUT the front lights and the back lights have different switchs- or so the switch panel says.
So...do I connect both of these wires at each corner to the one wire from the unit?
The final "professional" work it needs is to have the headliner over the front seat replaced.
Thanks in advance for any help you can provide! 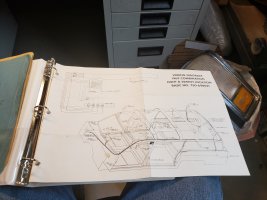 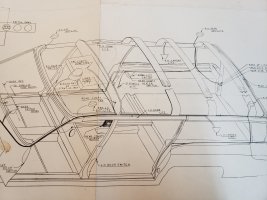 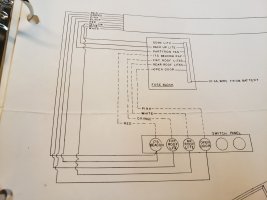 Super Site Supporter
Looks like one power to each light and grounding threw the body for the return. Test it turn on the power to the rear lights and use your test light to find the wire that goes on and off with the switch. Then the next time you do this when to take something apart flag it with a piece of masking tape and write on there what it is. Makes going back togather a lot easier

My car had a Q and a Q brake. The Q was triggered by the horn rim if the toggle was switched to siren. My open door light is on the lower dash by the driver's left knee. Other switches were front and back. Also had sideway toggles for the left and right alley lights that were added at some point.. I removed these entirely. So the configuration of light switches from any diagram isn't going to correspond to this car. There is also a switch to the sealed beam red lights on the side of the car, which I also removed. Many things were moved to a totally separate switch bank that was attached between the siren control and radio..like the HARE radio and fan. I removed the two MARS lights from the hood and discarded all that wiring. I have a wiring diagram, but it is to a Lifeliner. Dan Scully, can you show more of this diagram? Ed, thanks for your comments....If one turns out to be hot, and one is ground, do I just ground that second wire to the long bolt that goes through the roof? Thanks everyone. 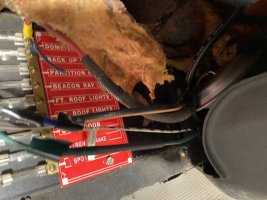 Dan thanks-your 3 photos just fully opened. My wiring diagram for the 74 Lifeliner had all white wires with little black dots on them. After someone gave me the wiring diagram, I realized these little dots were numbers!!! Imagine that. In the car I'm working on: The toggle marked "front" has two orange wires, and the rear, white- as in the diagram. I'll check the fuse panel (above) and then see which of the two orange wires is hot. NEXT: Why are some toggles 2 blade, some 3, and some 5 and 6???. I've got some of each.
First rocker: HEAR system black: hot, yellow: out. Horn rim: brown: hot; gray ? blue ?; Front light: orange & orange. rear light: white, white.
Final switch: Red & nothing else; I'm going by photographs I took the minute I opened the panel up.
The second photo was taken a minute ago.
**The 184 was previously mounted ON a backboard cabinet, which I had removed before it was shipped to me. There is a wire that probably goes to it hanging from the roof. I'll check the continuity next time I work on it to see if that wire runs to the light panel, etc etc etc. Thanks again!

Ok folks, back to the simple question: Where the Grimes lights will be installed (and where they always were): There are 2 black wires coming out of the roof at 3 of the 4 corners of the roof. Thanks to advice (above), The front switch (orange wires in and out) are continuous with both black wires (1 and 2) and the single wire (7). The rear switch (white in and out) are continuous with all 4 rear wires (3, 4, 5, 6). 3, 4, 5, and 6 are continuous with each other, and will be hot when the switch is turned on.
SOOOO back to the original question- why are there two black wires, (live when the switch is on) going to the one wire on the light fixture.??? 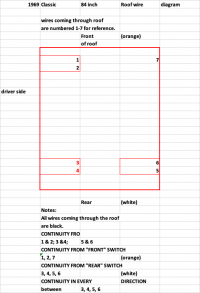