ACC marketed the Amblewagon to a variety of professions, seen here in a 1959 FoMoCo ad. 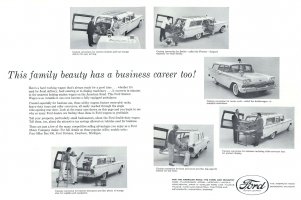 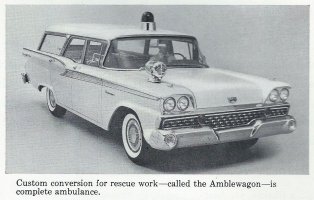 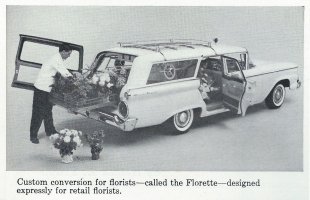 Super Site Supporter
My very first car was a 1959 Ford Thunderbird. While the car didn't look like this one, it appears they had the exact same wheel covers! I'd recognize those babys anywhere, I can't tell you how many countless hours I spent washing and waxing and buffing that beloved old car, even though the tires were bald they were super shiny with entire cans of Blech white tire cleaner followed by entire bottles of Armour All, and even waxing and buffing the wheel covers by hand, and shampooing all the worn carpet on the ol' bird, including the shag carpeting that covered the entire dash board to cover up all the cracks! The year was 1989 and I could have had a much newer, nicer, more dependable car at less money but I didn't care, I only had eyes for my old T-Bird.
You must log in or register to reply here.
Share:
Facebook Twitter Reddit Pinterest Tumblr WhatsApp Email Share Link
Top