Hello! I just got a 1958 Bonneville high-top ambulance and I'm trying to research its history. 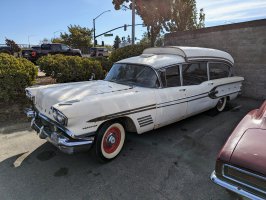 Other than the VIN there is a little plaque in the engine bay from the bay saying that it was turned into an ambulance by the Superior Coach Company. 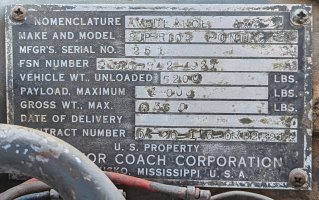 I've reached out to phs-online.com and the Superior Coach Company but neither of them have records going back to '58. Here's the information that I have including the text of what's on the plaque:

There are some hints that it might have been a military vehicle at one point because the insides of the door wells and engine compartment are olive drab with some information stenciled on. 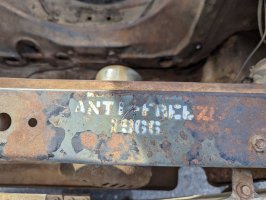 The car also came with the owner's manual, a parts catalog, and some pretty fun marketing material from the era, which is exciting! 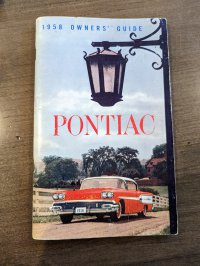 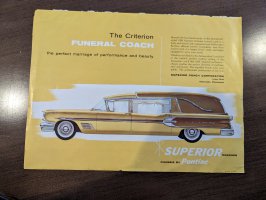 Super Site Supporter
The hint in its start is the tag co track number is the GSA contract it was built to. The property of the US is the other. Most of them were sold at auction or given to other goverment agencies like state county or city. It was a cheap wat for the city to get ambulance equptment.

Super Site Supporter
All military vehicles have a date plate as John said. FSN is Federal Stock Number, anything to do with the gov has a FSN from a paper clip to a plane. This is the one from Karl I assume, looks the one he was selling. Defiantly a military purchase when first sold.

The FSN breaks down into a two digit group, a two digit classification, and seven digit serial number. This also tracks because 23 10 is passenger vehicles, including hearses and ambulances. So that's awesome!

I haven't been able to find a way to search the contract number or the FSN serial number (FIIN) but I'm going to keep digging.

@Daniel Scully This is the one from Karl. He took great care of it and I'm happy to be able to take it the rest of the way!

Casey, that is a rare soul you have acquired. It is the first 58 straight ambulance that I can recall in my 15+ years here.
Lots of people in PCS to help you with what questions may came up.

Here is another '58 Superior Pontiac straight ambulance owned by the ambulance service that I worked for in Winnipeg, Manitoba in the early to mid '70s. I took these photos in '67, and the Pontiac was traded in for a new '70 Springfield International a year or two before I started there.